Nothing could make the beginning of autumn more bearable than a portion of crispy tarte flambée with a glass of federweisser (= fermenting new wine). Tarte flambée originally comes from Alsace and in the classic version the wafer thin dough is topped with sour cream, onions and bacon. Of course we cook vegan tarte flambée. It not only tastes fantastic but it is also done in less than 30 minutes. It is based on a super easy dough made from flour, water, oil and salt, which does not have to rise or rest for a long time. Even the vegan alternative to sour cream is quickly homemade with only 3 ingredients. And instead of bacon we use smoked tofu.

In order to not get bored with the classic Alsatian tarte flambée too fast, we also have 2 great alternative toppings for you. The version with pumpkin, pear and rosemary tastes even more like autumn than the original, while the fresh, mediterranean version scores with dried tomatoes, olives and spring onions. Basically you can put everything your kitchen offers on a tarte flambée as long as it tastes good for you. Be creative!

Preparations
1. Put the ingredients for the dough in a bowl and knead well. Let the dough rest until you’ve prepared the other ingredients. Heat the oven (with a baking sheet in it) to a full whack with top and bottom heat.

2. Mix soya yogurt, vegan cream and apple vinegar and season with a good amount of salt.

3. Now prepare the ingredients for topping the tarte flambées:

4. Divide the dough into three balls and roll each one out thinly on a baking parchment with the help of some flour. Spread the vegan sour cream on the dough and top with ingredients of choice. Season with salt and pepper and bake on the bottom rack until crispy. This takes usually only about 7-8 minutes. 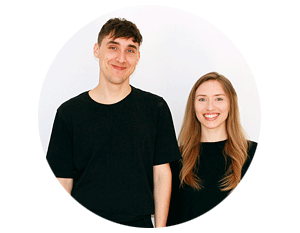 Yesterday we collected loads of wild garlic. We us

Have you ever tried vegan mett (German minced pork

Unfortunately, due to the current Corona situation

Pizza without cheese? It's totally fine. But today

Whole baked celeriac. Plus some mashed potatoes an

Time for warm and creamy breakfast. Time for porri

White chili? 🧐 You heard quite right. Say hi to